Nanotechnology is the study of manipulating matter on an atomic and molecular scale. Generally, nanotechnology deals with developing materials, devices, or other structures possessing at least one dimension sized from 1 to 100 nanometers. Nanotechnology also refers to the study of processes on the nanoscale in the laboratory which facilitates the manufacture of products. Nanotechnology has tremendous potential in every field of science, engineering, and technology. Existing products have been getting marvelous improvements with the applications of nanotechnology.

This book covers the importance of nanoscale in research & development by presenting various examples. Various products manufactured by various companies using nanotechnology worldwide have been presented in this book.

This collection gives information on the role of research in
developing nano products. After tracing the life-cycle of product development, it then discusses the role of the government in furthering Nanotechnology within the country. The developments around the world and especially in India are discussed in detail, with the chronology of major conferences over the recent past being traced. 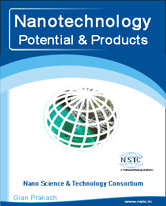