Medical research is now focusing increasingly on the micro and nanoscale. Concepts such as lab-on-a-chip (microarrays) are now being used the world over to facilitate ultra-sophisticated tests while taking a negligible amount of biological material from the patient. Nanostructures such as quantum dots and dendrimers have started finding extensive applications in curing cancer, and the silver nanoparticle is considered a prime candidate for fighting viruses such as AIDS. Each of these advances has needed manipulation at the nanoscale. An increasing amount of attention is being paid to development and manipulation of biomaterial at the nano-level because that is the way nature works. Nature uses minuscule building blocks such as DNA to build huge structures such as the human body. Hence, medical research is now tending toward the view that to correct seemingly incurable defects, a thorough understanding of Bionanostructures such as DNA is imperative. The study and manipulation of structures at the nanoscale and their use in medical applications are known as  Bionanotechnology. 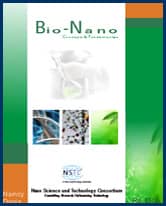